Mr. Moore is a retired Master Sergeant after serving 32 years in the military.  He is currently a teacher at a local junior high school.

Mr. Moore began his martial arts training as a family activity with his son Josh, in 2002, and by January 2016, he became certified as a V Degree Black Belt.

He is certified as a Class A & B umpire, and has competed in National Tournaments, and was chosen to be the USA team coach for the ITF World Championship in Benidorm, Spain in 2013. 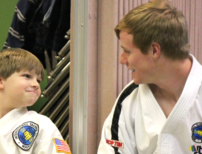 Taekwon-Do is the Korean martial art of unarmed combat which has grown into one of the most popular martial arts for self-defense, personal development and sport.

Josh Moore began his martial arts training in 1999, and by January 2016, became certified as a V Degree Black Belt.  He followed his father's footsteps by serving 4 years in the Air Force, and is now working towards his degree at the University of Houston.  Mr. Moore has competed at numerous National Championships, as well at ITF World Championships in Korea, Spain, and Italy.​